The was developed by Garry Holloway. The concept was first founded in Japan during the 1970s by Professor Okuda who developed the Fire Scope. However, the Fire Scope was limited to a desktop device. With the development of the Idea Scope, the device is portable and easy to use.

The is a simple pink reflector with a viewing hole and lens. It creates a structured light environment that allows users to measure a diamond’s brilliance by showing its light return and light leakage, in relative to its contrast. It may also be used to analyze the optical symmetry of the Arrows in a diamond and minors facets (lower girdle length) of the diamond. scope is a versatile tool that can be used for any diamond’s shape, or clarity.

Diamond facets act like windows and mirrors, where its brightness comes from the reflection of the light source to your eyes. Thus, the redder the Ideal scope image, the brighter the diamond.

Below is an example of a Super Ideal Cut that is cut to have minimum light leakages and a well-balanced brightness and contrast which optimizes the brilliance of a diamond.

The image below shows a shallow diamond that has light return (light pink) areas at the girdle. Areas that have weaker light return will look less bright and greyish, as shown on the actual diamond’s image. This causes the diamond to appear smaller as the edges of the diamond look dull. 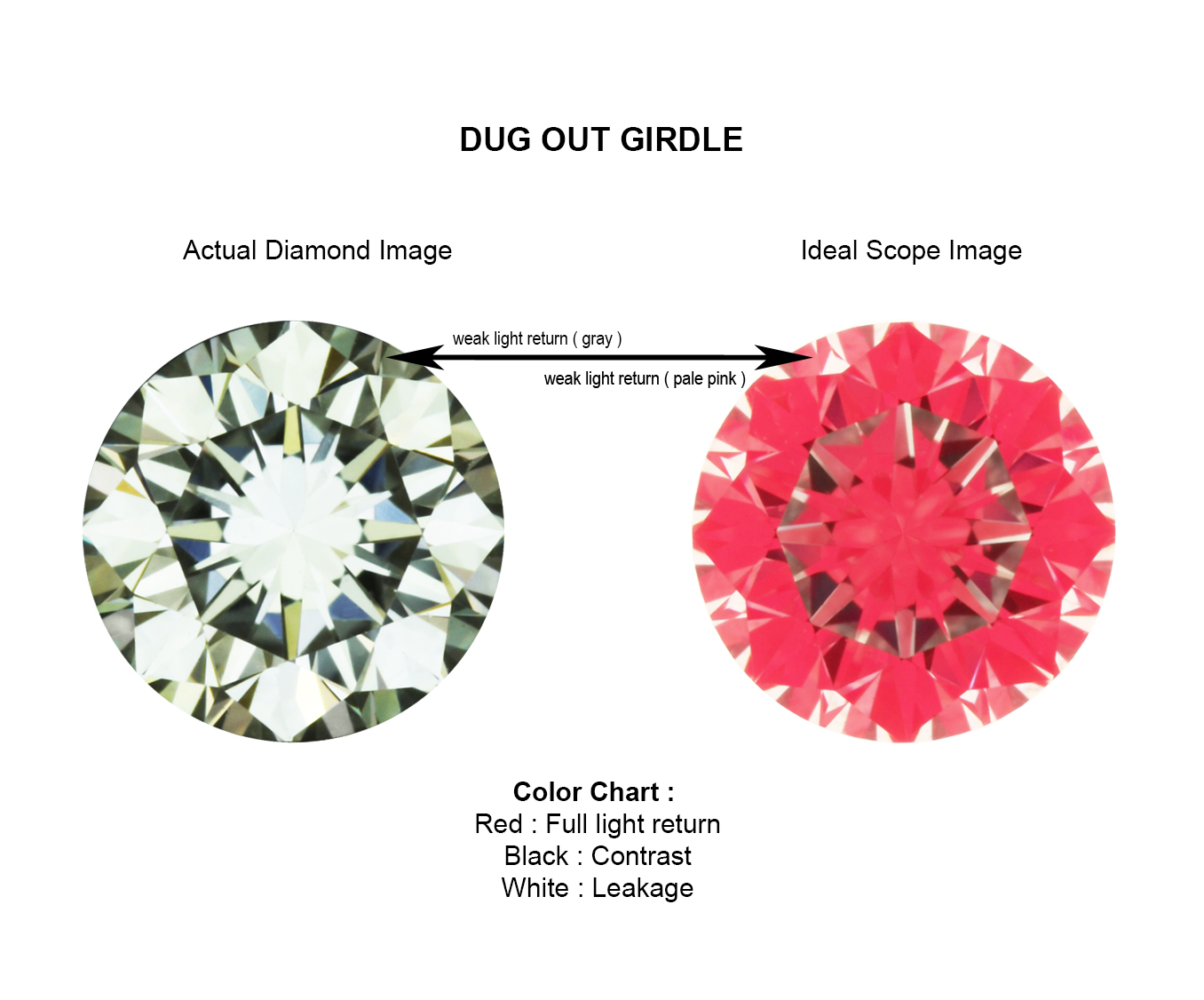 The 8 distinct black arrows when you view a diamond from the front is known as the “Head Shadow Star”. It is the reflection of the observer’s head which blocks the light source. In essence, the Heart Shadow Star is the reflection of the observer’s head. It adds contrasts and sparkle, depending on the angle. Light leakages around the diamond’s girdle add contrasts on the edges of the diamond. When combined, the contrast from the Head Shadow Star and girdle light leakage create an overall contrast patterning in a diamond, improving its brilliance.

Very Shallow Cut
The diamond below shows a very shallow cut. It’s a good representation of a diamond that is over contrasted. Although this diamond has minimum light leakages, it has too much contrast, reducing the brightness as there is less red (light return) area. The over contrasted effect will cause the diamond to lose out on its brilliance despite its minimum light leakages.

Very Deep Cut
The diamond below shows a very deep cut. It’s the opposite of the previous diamond, where it lacks contrast. The 8 black arrows are no longer contrasted, but red (light return). As a result, the 8 arrows patterning in the diamond will be hardly visible. In addition, deep cut diamonds tend to have , also known as the “ring of death”. Light rays pass through these areas, without reflecting back. As a result, this diamond will lack brilliance as there is no contrast patterning and less brightness from the light leakages.

Top Heavy Diamond (high crown angle)
This image below shows a diamond with a very high crown angle, which is known as a “ diamond”. This causes the centre to be over clustered where the arrows are thick and grouped together, giving the diamond an over contrasted appearance. In addition, it causes light leakages near the middle of the diamond, creating a messy look.